In the October 2019 issue of the newsletter: 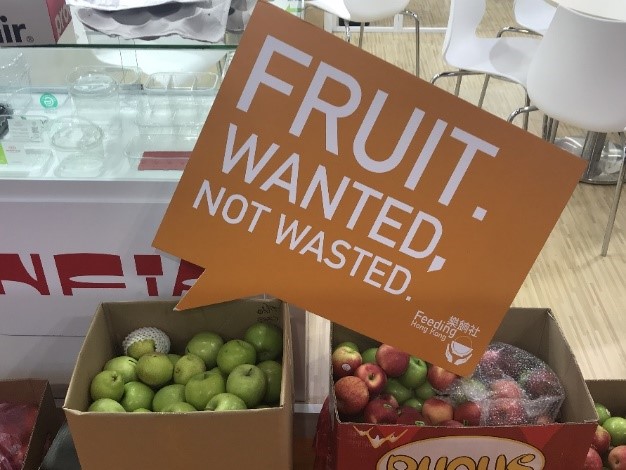 Today is World Food Day and we’re marking the occasion by re-launching our monthly newsletter!

World Food Day takes place on October 16 each year and is a day we pause to consider the global food system. The world produces enough food to feed everyone. Yet one third of all food produced is lost or wasted while one in nine people around the world do not get enough to lead a healthy and active life. The largest of concentration of people struggling with food security are in Asia. It’s an apt day to reflect on the role that food banking can play in turning an environmental problem into a social solution.

While we have been quiet on the newsletter front, we’ve been busy rolling up our sleeves to rescue more food and feed more people than ever before. In the last 12 months, we’ve saved over 780 tonnes of surplus; surplus that would have otherwise gone to landfill but has instead gone to support 130 charity programmes across the city. Together with our festive food programme and the fantastic donations from community food drives, this surplus has supported over 2.1 million meals for people in need in Hong Kong.

It’s all thanks to community partnerships, as you will read in this month’s newsletter. We hope you agree they are worth celebrating, especially today.

Asia Fruit Logistica (AFL) is an annual event, where worldwide suppliers gather in Hong Kong to showcase the world’s best fruits and vegetables. Since 2013, Feeding Hong Kong has collaborated with the organiser, German Industry and Commerce Co Ltd (GIC), to ensure leftovers from the exhibition can be rescued, not wasted.
On the afternoon of Friday September 6, fifty enthusiastic volunteers were on hand to make this happen. With their help, we collected over 5 tonnes of beautiful fresh food. And this amazing volunteer effort didn’t stop there.
Next up, were Kerry Logistics and Asian Tigers who deployed a truck each to help us transport product swiftly back to our warehouse. Together with our 10-tonne truck and temperature controlled Veggie Van, plus extra expert logistics from our charity partner Youth With A Mission, all food was packed and on the road before sunset.

Back at the Feeding Hong Kong warehouse, the next group of volunteers were raring to go. The number one job was to check everything was fit and safe to eat, then to sort and pack orders for our charity partners. Within 24 hours, all donations had been redirected to the following good homes:

This year’s AFL was a milestone year for partnerships: German Industry and Commerce, Asia World Expo, Kerry Logistics, Asian Tiger, Youth With a Mission, volunteers from Bank of America Merril Lynch, our charity beneficiaries and – last but not least – every exhibitor who donated their surplus, thank you one and all! 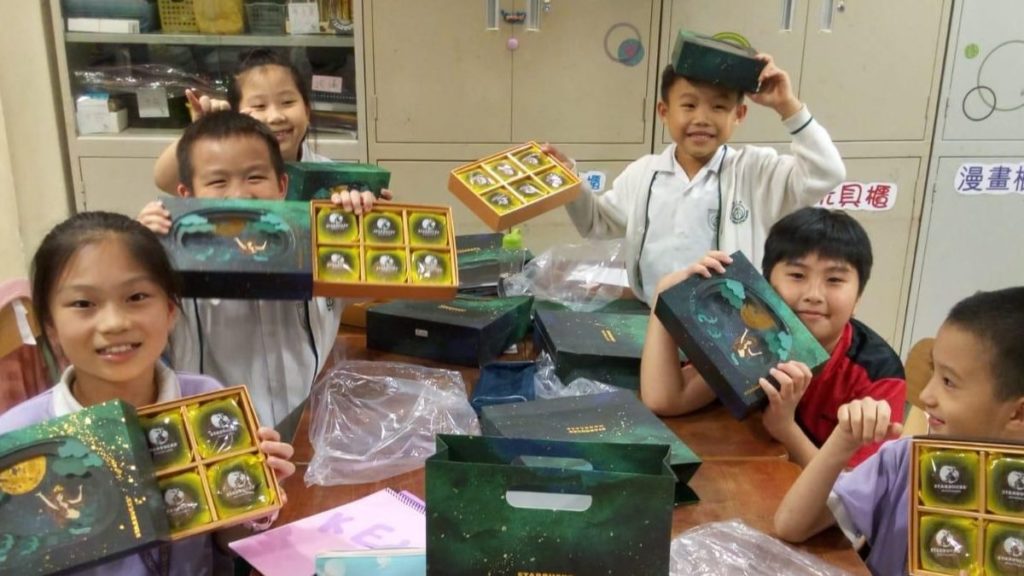 Did you know as many as 2 million mooncakes end up in landfill each year unwanted and uneaten? As much as we love these Mid-Autumn delicacies, it is an unappetizing thought. But actions speak louder than words, and this is what drives our annual Mooncake Madness campaign.

Supported by suppliers, schools and offices, this September we successfully rescued over 21,000 mooncakes. Sweet, savoury, large and small, a total of 3.8 tonnes of festive delicacies went to feed people not landfills thanks to an amazing community effort.

And this wasn’t the only food saved this Mid-Autumn. On September 12, we rallied support for a very special Bread Run. By the light of that big shiny moon, 70 Bread Runners helped rescue 1,308 delicious bread buns, loaves, sandwiches and salads. Instead, this fresh food was shared with charities first thing the following morning.

Last but not least, our FHK Festive food parcels helped bridge the gap between this surplus and other needed staples. 800 special Mid-Autumn parcels packed with rice, cooking oil, noodles and canned goods helped frontline charities such as Caritas Community Centre – Aberdeen, cover the basics – as well as mooncakes!

A big shout out to our community partners Bloomberg, Deutsche Bank, Pizza Express, WeWork and all our individual donors and volunteers for making this Mid-Autumn such a meaningful one. A total of 50 charity partners received an extra heart warming delivery this year thanks to your support. 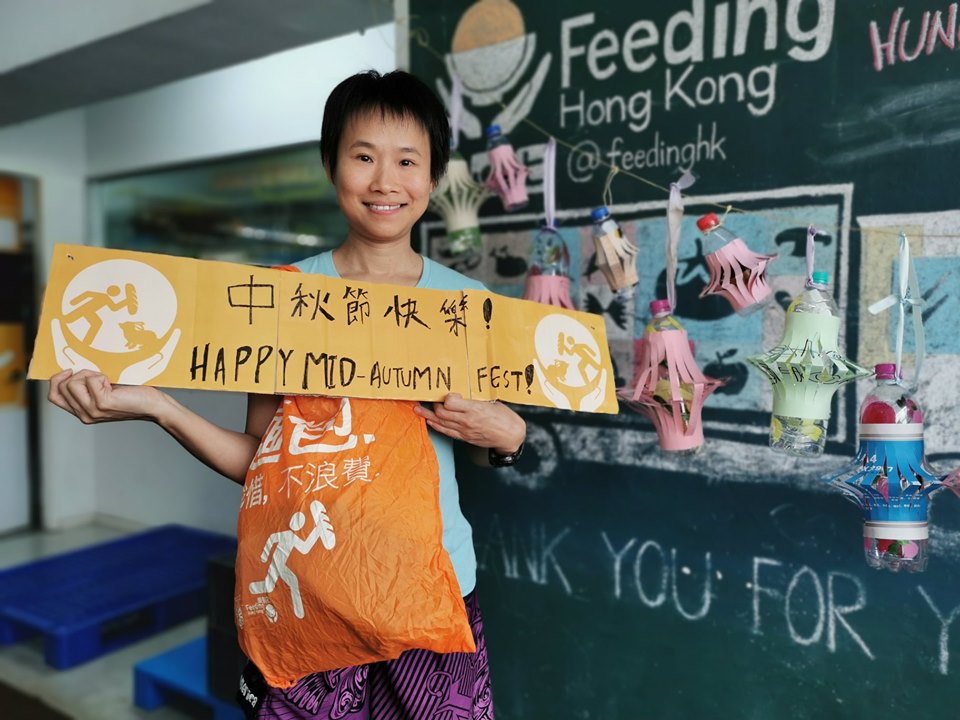 In 2012, Feeding Hong Kong launched the Santa Sack campaign to share an extra special Christmas food parcel with vulnerable families and seniors. Today, we extend that festive spirit beyond December. From Chinese New Year and Tuen Ng, through Easter and Mid-Autumn, we have our charity partners covered.

Every parcel is lovingly packed with essentials such as rice, cooking oil and oatmeal, a festive treat such as a box of cookies or special condiment and something to treasure – our 2019 Santa Sack includes a “Food. Wanted, not wasted!” shopping bag and calendar.

In the coming 12 months, we’ve set ourselves a high target: to deliver 15,000 parcels starting with 4,500 in December. But we need your help to make it happen.

Funds: financial donations are needed to support the cost of food purchasing, packaging, transportation and logistics costs. We have set up a special fundraising page – support us with a donation of HK$150 to help feed a family and senior this Christmas and Chinese New Year. We also have special donation opportunities for corporates and groups that include joining a festive parcel packing session for 15-20 people.
Food: calling all food companies! Can you help by sponsoring an item for our pack? We aim to include 10 food items in each food parcel and every item sponsored makes a difference. It means our funds will go further and feed more people.

FHK Festive is a multi-partner programme that wouldn’t be possible without your support. Help keep the festive spirit going all year round and make a food or financial donation today!

Andrew Kwan is a charity guy. Before joining as our Charities Officer in January, he had already worked with a non-profit running student and education programmes. “The difference is that Feeding Hong Kong functions efficiently like a business: there are deadlines, costs and targets to deliver. No time is wasted, let alone food,” Andrew tells us.

He knew there was wasted food, and has always been environmentally conscious. But working at Feeding Hong Kong has put him in direct contact with the huge amounts of food that would be wasted if not rescued. In Andrew’s words: “It was a shock!”. As a result, he has become more determined than ever to find solutions to re-direct surplus food to charities who can benefit from it.

“It is not without challenges”, Andrew admits. Significant co-ordination is required, the more so for ad hoc donations. There is a regular allocation schedule – but things do not happen regularly! His artistic temperament sometimes finds it challenging having to hurry hurry because stock is arriving and cannot wait. Yet, he does not compromise on attention to detail, and makes sure that everything is covered from the volumes confirmed by each charity and the day they can accept the donation, to the right size truck and equipment needed for handling cases or pallets. There is a long list of little things to check but Andrew takes particular pride in helping smaller charities navigate the logistics and to become experts over time.

In his spare time, Andrew plays tuba, forms an ensemble and performs at concerts. He also volunteers at other eco projects, and joins mindfulness events. His final words are an inspiration to us all: “my goal is to persevere in a cause that is worthwhile and needs support, while finding ways to relax and enjoy the beauty that life provides”. Thank you Andrew for bringing this passion and balance to work every day!

Until January 31, 2020, you can go an extra special mile with your Asia Miles: donate them to Feeding Hong Kong to help us save more food and feed more people!

We’re excited to share with you two very special Asia Mile packages. Bread Wanted not Wasted will support our weekly Bread Runs and ensure delicious fresh bread and sandwiches can be safely and swiftly collected and delivered to morning food programmes. Meanwhile, Meals that Matter will help fuel our redistribution of rescued packaged staples to support food parcel programmes across the city.

Go to iRedeem at Asia Miles today and help us turn an environmental problem into a social solution. With just one click, you can help tackle two challenges and support this year’s World Food Day call: Healthy diets for a #ZeroHunger World!

Thank you to Cathay Pacific and Asia Miles for making this partnership possible.

The best workout in Hong Kong 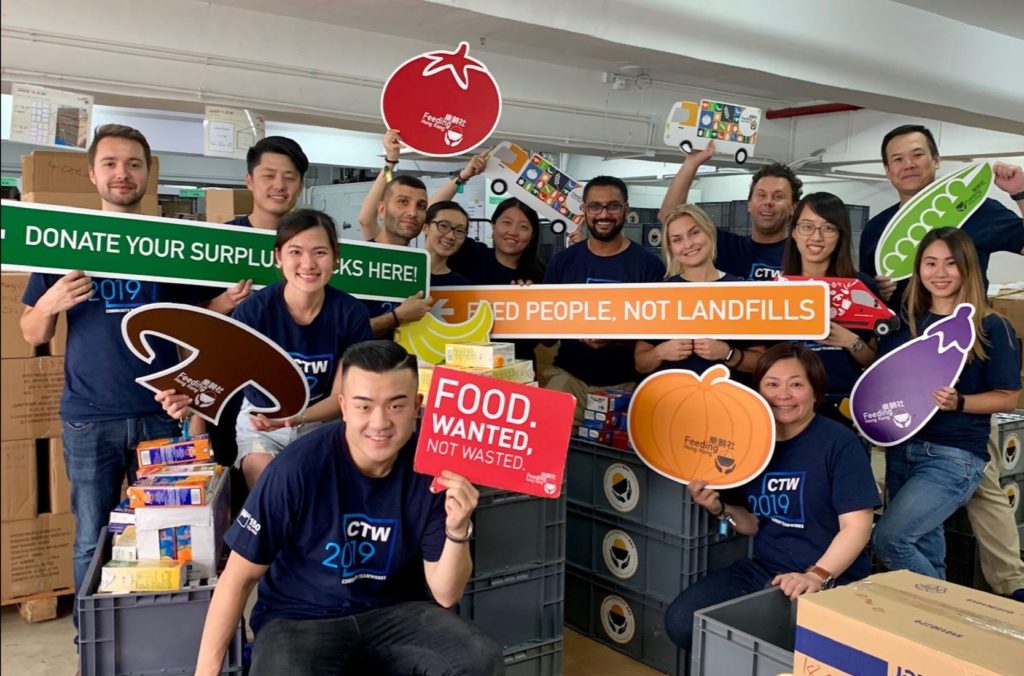 Every week, 24 pallets of assorted product arrive at the FHK warehouse in need of sorting ahead of charity delivery. Corporate volunteers across the city have responded to our call to join a workout with a difference and are helping make this possible!

Since January over 2,500 people from 70 different organisations have walked through the doors of our Yau Tong warehouse to take part in one of our warehouse sessions and ensure good food can get to a good home. It’s a feel good afternoon of activity on your feet: volunteers check every item is still fit and safe to eat, sort them into categories and finally pack then into boxes for easy onward delivery.

We still have 10 open shifts between now and Christmas that need a set of helping hands. Each accommodates 12-15 volunteers and runs from 2.30-5pm. Can you help? Contact us today to find out more!

Check out our online volunteer calendar for other opportunities this coming month.