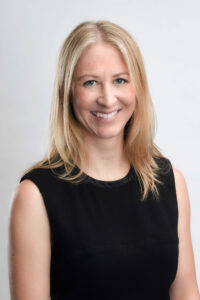 Gabrielle Kirstein is the founder and driving force behind Feeding Hong Kong which she established in response to her growing awareness of the amount of food that was being wasted. After spending 2 years connecting bakeries with local shelters she quit her corporate career in communications and events, and in 2011 set up Hong Kong’s first surplus Food Bank, with a mission to fight hunger and reduce the amount of quality food being sent to the city’s landfills.

Prior to launching Feeding Hong Kong, Gabrielle earned an MSc in Developmental Studies from the School of Oriental and African Studies. Her passion for waste reduction led her to Redress, an environmental NGO working to reduce waste in the fashion industry. She first became involved as a volunteer, and later as a Board Director. One of her achievements at Redress is being co-founder of the Redress Design Award, Redress’ flagship programme. Whilst there she also became involved with a food waste project which paved the way to Feeding Hong Kong.

Gabrielle has a long history of volunteering and community service, a trait instilled by her parents from a very early age. From spending many a Christmas Day as a child in Manchester helping out in the kitchen of a homeless hostel, to bridging the gap between food waste and hunger in Hong Kong, her passion to make the world a better place has always been a driving force. Under her leadership Feeding Hong Kong has not only made a significant impact on food insecurity and waste in Hong Kong, but has also made great steps in raising awareness of the issues.

When not fighting against hunger and waste in Hong Kong, Gabrielle loves spending her time exploring and hiking in Hong Kong’s hills, what better way to exercise the body and feed the soul.